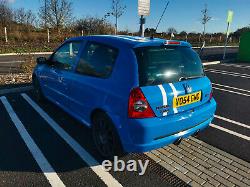 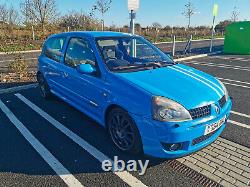 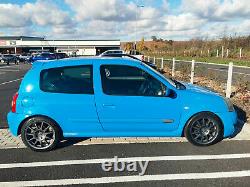 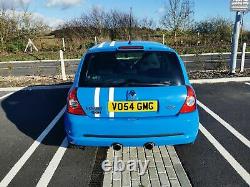 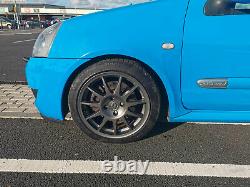 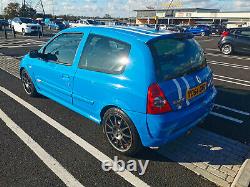 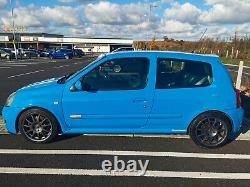 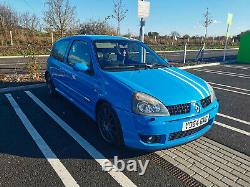 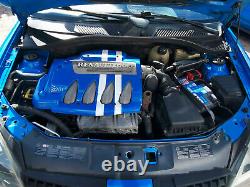 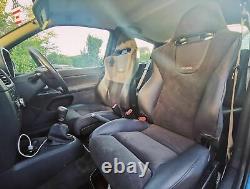 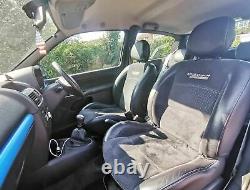 Welcome to my Clio 182 FF! Prepare for the most in depth advert ever....

I bought the car in February, intending to gradually restore it and use it driving on B-roads and to work, however due to the nature of 2020 the gyms have been shut and work has been quieter, so it isn't getting the use I bought it for and has mainly just been sat cruising on the motorway. Since February it has basically undergone a piece by piece restoration mechanically, with 99% of the work being carried out by renowned Renault Sport specialist AWMotorworks in Essex. The mileage is at 128,000 and may rise due to light use by myself.

The gearbox DOESN'T crunch in any gear at all which seems to be rare for these, it shifts seamlessly and actually goes into gear better than my 2018 Ford Mustang weirdly. The engine pulls really well, which even surprises me to this day when I drive it.

I always let the car warm up so the temperature gauge reaches the middle before setting off also. It starts on the button every time without fail. The car really hasn't let me down at all, and has been very dependable.

Powerflex bushes were used where appropriate due to OEM Renault equivalents not being up to scratch really, however I kept the OEM Renault wishbone bushes in the new wishbones as they last longer than the Powerflex bushes. I opted for Cooksport springs with the suspension refresh, as they do not lower the car immensely, but the spring rate is increased, and they are a much better alternative to OEM Renault springs which are quite soft and sit the car quite high. That said the car is still very comfortable.

I bought some mint Recaro Trendlines to go in the car, which are currently fitted. They were re-trimmed not long ago, and came out of a Clio V6.

As a result they do incline fully for people to get in the back, but the angle of the seat is adjustable. In my experience, nobody gets in the back of a Clio 182 anyway, so that's not really a loss anyway! The previous owner had a Scorpion RS192 exhaust fitted, and I was going to source an OEM Renault Clio 182 exhaust just for the sake of being original, however they all appear to have rusted to pieces now. The bodywork has the usual wear and tear of a 15 year old car, however the colour is vibrant (I have parked next to other Racing Blue Clio's and my paint colour was less'flat'), and the car passes the'5 meter rule' looks great from 5 meters away!

, however there is touch up paint here and there, and there is a slight dent in the bonnet which could be pulled out (I'd get it pulled out, as the bonnet isn't rusting unlike most 182 bonnets). That said, there is no rust anywhere on the car or under the arches, the car does not leak into the footwells (which is a fairly common thing on 182's it seems), so I'd say it is a fairly solid chassis all things considered. This car has been used and not garaged, however it is virtually new mechanically now with the all new suspension, good gearbox and freshly serviced engine, so it is a great car for someone who wants one of the best hot hatches from the last 30 years but doesn't want to feel guilty or nervous when driving it! The interior is actually in very good condition for the age, and I was pleasantly surprised when I viewed it and bought it.

Everything works; cruise control, speed limiter, heater, air conditioning (I had it regassed, nice and cold now), radio controls behind steering wheel. The car has an Alpine FM radio that has USB and Bluetooth connectivity also. The Renault Speedline Turini's on the car originally came from a Clio 182 Trophy I believe, as they are not as wide as Clio 172 Cup Turini's due to the different offset the two sets of wheels had. They have been recently refurbished in Anthracite grey, and do look fantastic.

It comes with two keys, a spare wheel it came with it... , a big folder containing tons of documents and receipts going back to when it was first registered, and a folder of documents/invoices/receipts from my ownership also. The car has a very clean MOT history, and can be viewed on the MyCarCheck app. I have brand new genuine Renault OEM front & rear discs on the way, with a set of brand new Brembo pads all round to go on also Please see the list below for the work carried out by me, and some bits by the previous owner. Bad Points: Could do with a clutch cable; functions perfectly and easy to modulate, it just doesn't feel as good as new (probably just me being a perfectionist) although people say the clutches on 182's have always felt heavy/horrible from new.

HT/Ignition leads are not OEM; again they function perfectly, they're just not an OEM part for what it's worth. The centercaps could do with being replaced if you are an absolute perfectionist like me (some glue showing on Renault badges).

Small dent in bonnet as stated above, could be pulled out easily. Slight exhaust whistle, which if I'm being honest you won't even hear.

I had an itch to scratch, as I'd never had a 182 before, and I haven't been disappointed. Test drives will be conducted by me, I have a nice mix of B-roads and dual carriageways nearby.

I can't entertain a viewing without masks being worn unfortunately, and please don't bring 4 of your mates along also. Tyre kickers and lowballers also won't be entertained. Work carried out by me: Various: 2x Brand new Driveshafts complete with CV Joints 2x Genuine Renault OEM track/tie rods - Both ends (inner and outer) Gearbox oil replaced - Replaced when driveshafts were replaced (No metallic particles in the fluid that came out).

This item is in the category "Cars, Motorcycles & Vehicles\Cars\Renault". The seller is "nickh1993nicholas" and is located in Chelmsford. This item can be shipped to United Kingdom.